The NFLâs Worst Moment is Ahead 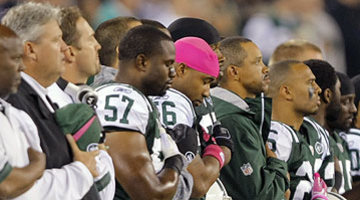 Nearly a decade ago, the NFL experienced its finest moment.

It was when then-NFL Commissioner Paul Tagliabue halted the league for a week in the immediate aftermath of 9/11.

As the 10th anniversary of 9/11 approaches, another great moment is supposed to be ahead for the NFL.

The 10th anniversary of 9/11 occurs this year on a Sunday. As it happens, it coincides with the first Sunday of the 2011 NFL season.

The NFL recognizes and even embraces this by scheduling games at New York and Washington (the Giants are at the Redskins and the Jets are hosting the Cowboys). In addition, the league is promoting the tributes on its website.

Picture it now. Unforgettable images of packed stadiums across the country, including New York and Washington, filled with fans waving the American Flag, patriotism, and tributes to the victims of Sept. 11 and our military.

Sadly, because of the NFL lockout, this vision seems to be a mirage, replaced with the reality of silence at all of these locations. If this happens, it will be the worst moment in NFL history. And it will be of its own doing.

I wrote in a previous column what the true purpose of sports is, centered on how the sports community rallied to help the victims of the Haiti earthquake.

Sports served the same purpose after 9/11. Who can forget the patriotism throughout Shea Stadium when the Braves played the Mets, the first sporting event in New York after the tragedy, or the American flags waving at stadiums when the NFL returned to action?

Sports took people’s minds off the tragic events of 9/11, if only for a brief moment. It is no different today. Whether it’s the soldier serving in Afghanistan or Iraq, or the worker arriving home after a 10-hour work day, sports serve as a sanctuary for people to escape their stresses, providing a welcome diversion from the challenges of real life.

Providing that diversion is the responsibility owners and players have to the public. In many ways, it’s how they serve their country.

But with the ongoing lockout, which seems to have no immediate end in sight, playing football on Sept. 11, 2011 is in serious jeopardy.

To use terms like disastrous, tragic, or heartbreaking to describe the NFL not playing on the 10th anniversary of 9/11 is inappropriate considering the significance of the anniversary.

Shameful does seem to be apt description, however.

We’ve been through this before, in 1994, when the World Series was cancelled because of the strike.

But this is different than 1994. While the MLB players and owners deprived the fans of a hallowed American tradition of the World Series, it’s not remotely on the scale of what happened to America on 9/11. Ironically, baseball will be playing on 9/11, undoubtedly providing its own tributes.

The NFL not playing on the 10th anniversary of 9/11 will certainly be unforgettable for the league. People will never forget how the league and its players put their greed and selfish ambitions over their fans, and their country.

There is still time for the league and the players to come to their senses. But time is running out.