The Miracle on Ice: 30 Years Later 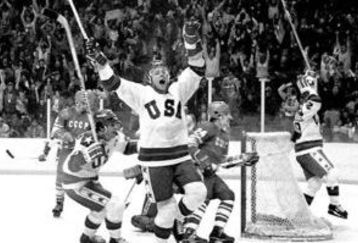 It was the greatest moment in American sports history. It created the greatest broadcast call in history and it created great memories for millions of Americans in 1980 and the ensuing 30 years.

The "Miracle on Ice" and Al Michaels’ “Do you believe in miracles!” account of the final seconds of USA’s 4-3 victory over the Soviet Union in the 1980 Olympics are etched in the psyche of Americans old enough to remember and, thanks in large part to the 2004 movie Miracle, to those who weren’t old enough, or even alive in 1980.

And while the movie is one of my favorites, my memories of the Miracle on Ice are traced back to 2002.

I was in Los Angeles in my role as the sports information contact for the Washington State University women’s basketball team. On a road trip to play USC and UCLA, we were staying in a downtown L.A. hotel during a weekend that coincided with the NHL All-Star Game, which was to take place at the nearby Staples Center.

One evening, as I stepped into the hotel’s elevator, a man entered alongside, talking on his cell phone.

That man was Mike Eruzione.

To my amazement our team was staying in the same hotel as the 1980 United States Olympic Hockey team, who were to be honored at the All-Star Game.

Here I was, in the same elevator with the team captain who scored the game-winning goal against the Soviets. As I stood there, I couldn’t help but think of another memorable Michaels’ call, “Eruzione scores!”

I was just eight years old in 1980, and though I have vague recollections from those Olympics, I certainly didn’t grasp the magnitude of the moment at the time.

But in that elevator, I sure did, and I was telling myself that I had to get Eruzione’s autograph before the weekend is over. It wouldn’t be quite a miracle if I did, but it would be cool nonetheless.

With each passing year after the Miracle on Ice, the legend of the game grows, as does its significance.

In 1980, it was a tremendous story that transcended sports, uniting a country in desperate need of something positive to grasp onto. On its 30th anniversary, it remains an event for all-times sake, as our national pride, and tears, swell up when footage of that game is shown.

Watching footage of the game after the fact was all people could do in 1980. Amazingly enough, the game was not broadcast live, but on a tape-delayed basis by ABC. I can’t help but wonder what if that game was played in today’s media world?

Of course, the story of a collection of collegiate players taking on the mighty Soviet Union would not be possible today, with professionals now playing in the Olympics and the different political dynamics that exist today.

Maybe that’s why the Miracle on Ice has such a hold on us 30 years later, because we know it will never happen again.

Or maybe it is because it teaches us a wonderful life lesson: Anything is possible.

I am reminded of that lesson each time I look at a picture frame proudly displaying Eruzione’s autograph, which I was able to get on the back of my business card in the hotel lobby later that weekend.

It’s my great memory created from the Miracle on Ice.