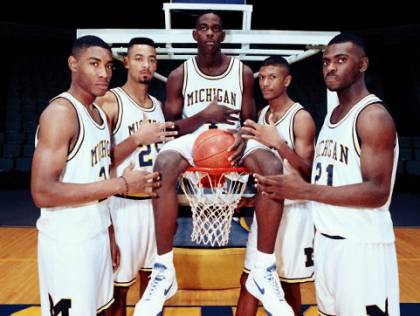 Following this year's "Selection Sunday" we were treated to a trip back down memory lane with ESPN's documentary on the "Fab Five." The "Fab Five" was the moniker given to the University of Michigan's 1991 recruiting class which consisted of Chris Webber, Jalen Rose, Juwon Howard, Jimmy King, and Ray Jackson. This group led Michigan to two consecutive NCAA Division I Men's National Championship Basketball games during the group's freshman and sophomore seasons (1992 and 1993) and also had a dramatic impact on American pop culture through their baggy shorts, trash-talking, shaved heads, and black socks. While the majority of the documentary focused on the legacy left by the group both on and off the basketball court, the end of the documentary focused on the circumstances surrounding the sanctions that were handed down on the University of Michigan by the NCAA in 2003.

One of the major issues that arose during the final segment was Jalen Rose's admission that he accepted extra-benefits from Ed Martin. Martin, who had formed relationships with many youth athletes from the Detroit area dating back to the early 1980s, had provided Rose with benefits both before and during Rose's time at Michigan. These benefits would generally be a violation of NCAA rules, as boosters are prohibited from providing any type of preferential treatment, benefit, or service to a current or prospective student-athlete because of the student-athlete's athletics reputation or skill or pay-back potential as a professional athlete. However, the one exception to this rule is if there is a clear preexisting relationship between the booster and the student-athlete. In the documentary, Rose claimed that his relationship with Martin fell under this exception. The question that results is what exactly is a "preexisting relationship" under this exception?

Whether a preexisting relationship exists can be easily defined when dealing with factual situations involving a current student-athlete or prospective student-athlete's family member or legal guardian. However, this determination becomes much more difficult when applied to parties beyond those classifications such as Ed Martin. In order to bring clarity to the issue, the NCAA Membership Services Staff has reviewed this exception as applied to non-family members and guardians and has set forth objective guidelines to determine whether a relationship would meet the exception. These guidelines are as follows:

The NCAA subcommittee further noted that prior to full-time enrollment, a prospective student-athlete may receive normal and reasonable living expenses from an individual with whom the student-athlete had an established relationship. The subcommittee mentioned the student-athlete's, non-scholastic athletics coach, or the family of a teammate as examples. These relationships could even be a result of the student-athlete's athletics participation provided that (1) the individual providing the benefits was not an agent, (2) the individual providing the benefits was not an athletics representative of a particular institution involved in recruiting the prospect, and (3) the living expenses provided are consistent with the types of expenses provided by the individual as part of normal living arrangements (examples provided included housing, meals, occasional spending money, use of a family car).
The subcommittee, however, did note that this interpretation did not apply to individuals who have no logical ties to the prospect. It further noted that a current student-athlete—who prior to initial collegiate enrollment, has been receiving normal and reasonable living expenses from an individual with whom he or she has an established relationship—may continue receiving occasional benefits (examples provided included meals during campus visits, reasonable entertainment), but not educational expenses associated with grant-in-aid such as tuition, fees, room and board, or course-related materials.
The important lesson to take away from this commentary is not necessarily what occurred between Jalen Rose and Ed Martin and whether the benefits received by Rose were an NCAA violation or protected under the preexisting relationship exception. The NCAA investigated the University of Michigan basketball program during this time period and its involvement with Ed Martin, and this matter came to a conclusion when sanctions were handed down in 2003. The lesson here is that both prospective and current student-athletes and their families need to be extremely careful with the relationships they form as a result of the student-athlete's athletic skill and ability. Furthermore they need to be very conscientious of any benefits that the student-athlete or the family is being offered or may have already received based on the student-athlete's athletic skill or ability. It is highly recommended that if the student-athlete or family has questions on this or a related issue, they review the current NCAA Guide for the College-Bound Student-Athlete and contact the NCAA Eligibility Center directly.