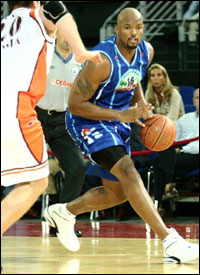 I had the privilege of meeting professional basketball player Norman Nolan (6-8, Forward) a few months ago at the Sports Legends Museum at Camden Yards for the Poet Pride movie premiere (a documentary about the storied Dunbar High School basketball program in Baltimore, Maryland).  Nolan was a McDonald's All-American in 1994 out of Dunbar High School.  From humble beginnings, Nolan went on to become a dominant post player in the ACC for the Virginia Cavaliers in the late '90s.

Nolan would eventually take his game overseas and has played in many different countries around the world for the last 11 years.  The last two seasons, Nolan emerged as a star in the Middle East.  This past season, Nolan had one of the biggest years of his career, as he helped his team, Al Qadsia, win the Kuwaiti Basketball League Championship.  The year before, Nolan averaged 20.1 ppg, 9 rpg, and 1 apg for Al Moutahed Tripoli (Lebanon Division A), as his team made its first appearance ever in the Lebanese League finals.

He has served as an ambassador of the game of basketball in the Middle East, where the sport has recently been gaining some ground.  "In most parts of the Middle East, basketball is pretty new," said Nolan.  "It's getting better, but [it] still has a ways to go.  The fans that do like basketball love it.  It's not many, but playing there coming from Europe, helps bring more exposure and helps develop the leagues there.  It's becoming more popular."

When we last talked, Nolan was unsure where he would be taking his career next, but last week, he decided to take his career to South America.  He has joined Ciclista Olimpico de La Banda (Argentina-LigaA), where he is playing along side former college standouts Frank Williams (Illinois) and Anthony Glover (St. John's).  In two games with the team, he is averaging 19.5 ppg, 8.5 rpg, and 2 spg.

Nolan is represented by California-based agent Dan Tobin of Wasserman Media Group (WMG), who has assisted him with his career from the beginning.

Nolan was gracious enough to answer some questions about his career and the life of an overseas player, as well as provide some terrific advice for some of the younger players looking to leave the U.S to play professionally.

NN: I can’t put into words what it meant to be in the same class of great high school basketball players.  This was at the time by far my greatest accomplishment and the ultimate goal as a high school All-American.  To follow the likes of Donta, Michael, and Keith also put it in perspective because of all they accomplished and the great careers they had in high school.

AA: Describe your experience playing in the ACC at UVA?

NN: I went to UVA because the ACC is the best basketball conference in the country year in and year out.  It didn’t disappoint at all during my tenure there.  [It was] the best and most exciting basketball I have played to date.  It was certain that every night I had to be ready to play and I think that has carried over into my professional career.

AA: After putting up big numbers at UVA during your senior season (21 ppg, 9.2 rpg, 52.4 FGP), what was your reaction when you went undrafted in the 1998 NBA Draft?  Were you prepared for this outcome?

NN: I had hoped to be drafted and thought that I would after the season I had.  I was prepared for whatever happened, whether I got drafted or not.  I was very disappointed, but didn’t let that stop me from doing what I love.

AA: Tell us about your experience when you decided to take your career overseas to Puerto Rico (Polluelos de Aibonito).  Was it a hard adjustment?  Who helped you make the transition?

NN: Well, I went to Puerto Rico after the NBA lockout season when I didn’t make the Indiana Pacers team and left the CBA.  My agent got me the job and that’s what jump started my overseas career.  It wasn’t hard to adjust at all.  I knew as an American I had to put up numbers and that’s what I did.

AA: What advice would you give to younger American players looking to go overseas to start their pro careers?

NN: The first thing I would tell them is that it's not as easy as they think.  It’s not for everyone.  It’s definitely an adjustment, and if you're not willing to learn and adopt to other cultures, then you won’t make it.  The food is different, the language is different, and the whole attitude of the people is different.  Second, I would tell them to work as hard as they can because unlike the NBA there are no guarantees and you're only as good as your last moment.

AA: What is one thing that you now know about playing overseas that you wish you had known back when you were making the transition?

NN: I wish there was a support group of former players who counsel the rookies who are going overseas and also wives to counsel girlfriends and wives on what to expect and how to deal with the transition.

AA: Fresh off a great season playing for Al Qadsia in Kuwait, do you still have aspirations to play in the NBA?

NN: None whatsoever.  I have had a more than great career overseas and I lost the desire when I was 26 to play in the NBA.

AA: Are you satisfied with your 11-year overseas career?

NN:  Very satisfied and I hope to play at least another 3 years.

AA: With stints in Kuwait, Lebanon, Puerto Rico, Greece, Italy, Spain, South Korea, and France, what have been the best and most difficult aspects of being immersed in other cultures?

NN: I’ve always been one to adapt well to my environments and that has helped tremendously in traveling all around the world and adapting to very different cultures.  I have embraced them all with an open mind to learn as much as I could during my time there.

AA: How has your agent(s) assisted you with your overseas career?

NN: Well, I have been with the same agent the whole time [Dan Tobin] and he has been very consistent in making sure I had a good job every year.  Through the good years and the not so good years, he has remained confident in me, and my abilities.

NN: Dan and I are extremely close.  I've been with him since the very beginning.  He's been completely honest with the opportunities, whether positive or negative.

AA: What sort of marketing deals has Tobin secured on your behalf? Is there any opportunity for deals in the local markets overseas?

NN: Europe is not like the NBA.  There are no marketing deals out there like you would see in the States.  Very few guys if any get a chance to do anything like that, other than what the team participates in.

AA: How does Tobin assist you in the process of entertaining offers from overseas clubs?

NN: It's simple. He tells me what we have and we look at all the options and decide which is the best for my career at that moment and then compare financials.

AA: Does WMG take care of your taxes and investments in-house or do they refer you to specialists?

NN: I have a financial advisor and an accountant that does that.  Dan recommended people and I used them early on, but as time went on, I learned more and did more for myself.

AA:  What did you think of the Brandon Jennings experiment and his successful journey in being drafted after skipping college?

NN:  It worked out well for him, but I wouldn’t recommend it for other guys in this situation.  Being young like that and going overseas can be really devastating.  He was lucky to be in a great city with a good team, but most won’t be so lucky.

AA:  What do you consider the biggest accomplishment in your basketball career?

NN:  Definitely this past season winning a championship in Kuwait.  Even though the competition wasn’t great, it's still extremely difficult on any level to win a championship.  It was my first one as a professional and it meant a lot.

AA:  What is one thing you would have done differently if you had a chance to replay your career?

NN:  I would have done the exact same thing.  The only thing I was missing was being 6’10” instead of 6’8”.  So, God gave me the gift to play and I think I used every bit of what was given to me.  I have no regrets.

AA:  What do you plan on doing when you retire from basketball?

NN:  I hope to be doing something in business for myself.   I have given a lot to basketball over the years and it has been great to me, but I just want sometime to be with my family and do something for me.

AA:  What did you think about the Poet Pride documentary?

NN:  The documentary was really good.  It really hit on a lot of points and touched on the history of Poet Basketball.  I actually learned some things about the history of Dunbar.  Tommy [Polley] and the guys did a really good job putting it together and it was definitely a story that needed to be told.  It was amazing to see all that talent come out of one high school.

There are a few good highlight reels of Nolan playing in the Middle East for Arab clubs that you can check out: Sagesse and Al Moutahed Tripoli.

On behalf of Access Athletes, we would like to thank Norman Nolan for taking time out of his busy schedule to do an interview with The Real Athlete Blog.  If you have any questions for Norman, please email me at matt@accessathletes.com and I'll pass them along.