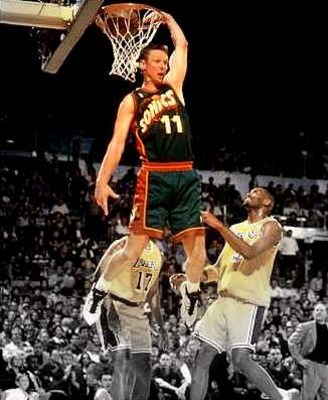 For some, his name may not ring a bell. But for others like myself, his name brings back memories of growing up watching “NBA on NBC” featuring some of the greatest players of all time during the 1990's. Detlef Schrempf, now retired from the NBA, played 16 seasons in the league with the Dallas Mavericks, Indiana Pacers, Seattle SuperSonics, and the Portland Trail Blazers. He is best known for his time with the SuperSonics, playing alongside the dynamic duo of Gary Payton and Shawn Kemp and battling the Michael Jordan-led Bulls in the 1996 NBA Finals. Detlef was also a member of the 1996-97 and 1997-98 powerhouse Seattle squads that won 57 and 61 games respectively.

During his career, Schrempf averaged 13.9 PPG, 6.2 RPG, 38.4% from behind the arc, and 80.3% from the free throw line. His personal achievements in basketball also include: member of the 1992 German Olympic basketball team, three-time NBA All Star, two-time NBA Six Man of the Year, one of only two German-born basketball players to play in the NBA Finals (Dirk Nowitzki being the other), and the first European-born player ever to reach 15,000 points for his career.

After his playing career ended in 2001, Schrempf was hired as an assistant coach for the Seattle SuperSonics in 2006 under then coach Bob Hill. However, after it was known that the Sonics would not be returning to Seattle, and instead moving to Oklahoma City, Schrempf decided to take a different career path than most of his retired NBA counterparts.

Schrempf now is the Director of Business Development at Coldstream Capital Management, Inc., a privately owned investment manager of Boston Private Financial Holdings based out of Bellevue, Washington. At Coldstream, Schrempf helps families and individuals with all aspects of their wealth management, including financial advice, game-planning for future financial expenditures, and retirement funds.

Schrempf also is the founder of the Detlef Schrempf Foundation, which he started back in 1996 during the height of his NBA career. At the foundation, Schrempf gives back to the Seattle community by donating money to charity and raising money for specific benefit causes. The Foundation uses a multitude of fundraising events such as golf tournaments, gala and auctions, celebrity dinners and functions, family festivals, benefits concerts, basketball tournaments and camps, and golf tournaments. To date, the Detlef Schrempf Foundation has raised over $8-million for Northwest charities and another $2-million in trade relationships.

Access Athletes was able to get an exclusive interview with Detlef to talk about his career after basketball – one that is certainly different than many other retired NBA veterans, but has certainly been successful almost a decade after his departure from the hardwood.

AA: Why is that you decided to find a job outside of basketball? Did you ever think of pursuing a career in coaching? Scouting?

DS: I started thinking about life after basketball when I was still in the NBA. While running our foundation, we were able to really build some strong ties in our community and get exposure to the business world. I was able to leverage that when we started a venture fund in 2000 and am able to really use it now in the wealth management industry.

I have coached/taught basketball for a long time – got my official coaching license as a 16 year old in Germany, doing youth camps all over the world. I coached for the Sonics for a year and a half, but knew that they were leaving town. With our kids in high school, we had no interest in moving anywhere.

AA: What was the most difficult aspect about making the transition into retirement after a 16-year NBA career?

DS: Being able to perform in something that does not give you a physical and emotional high almost every day.

AA: What is one lesson you learned from the experience of relocating to play for a different team, which you did several times during your career?

DS: You can look at it two ways – the team does not want you or the other team really wants you. I try to look at the positive and make the best out of it. Change is good and it creates new energy.

AA: In starting the Detlef Schrempf Foundation in 1996, what are some tips that you can give younger NBA players who are looking into starting their own charities?

DS: Have a plan/strategy and mission. Have expectations/goals on how much money, time, and energy you want to put in. Have it run professionally and not as a way to keep family and friends employed.

AA: In running your own Foundation, what challenges did you face in ensuring that your organization was operating according to IRS standards and meeting its goals?

DS: When filing for and finally getting the 503(c)(3) status, you have to live by certain rules such as accounting/auditing. We made sure we were properly set up, have a good board and management, and have a neutral party overseeing the accounting side. Also since we are an event-oriented foundation and not an endowment, we have to put on great events to raise money for our causes – do it effectively with sponsorships, ticket sales, etc., with the goal of donating a large percentage of the money raised. When we were not able to accomplish that with an event, we dropped it or changed it so it met our standards.

AA: What is your take on the Sports Illustrated article "How (and Why) Athletes Go Broke" that found that within five years of retirement, an estimated 60% of former NBA players are broke?

DS: Check out my blog of Nov 10 - http://detlefsblog.blogspot.com/.

AA: As a wealth management specialist, what sort of things need to be done to curb this systemic problem affecting NBA players?

DS: It is a tough issue to tackle since it will need serious follow-through from many participants – the NBA, the NBPA, agents, shoe companies, etc. The key is education and having the different groups compromise for the long-term welfare of the players and their families. There needs to mandatory counseling and education – especially if you have not gone to college or can’t prove that you are able to function in the real world. Obviously, that will probably never happen since we would have a strike from the player association on our hands. Therefore, one must hope that the players – or at least some, find the right counsel.

AA: Knowing what you know now from your work with Coldstream Capital Management, Inc., what are some things you would have done differently in terms of managing the money you earned while you played in the NBA?

DS: I would have been a lot more diversified and not so heavy on real estate (which worked out for the most part) and I would have paid more attention. When you focus on one thing and trust others with the rest, it is easy to look away.

AA: What sort of advice can you give to an NBA player who is amidst his career to prepare himself for life after the pros?

DS: Have the right advisor, build a plan, do a cash flow analysis to see what you have/need to live comfortably for the rest of your life – assuming you will not earn another dime after playing ball – and then stick to it. Make sure you have your estate planning in place and start college funds for your kid(s). If charitably-inclined, come up with the right plan that will not leave you with the regret of having to spend money and time on something you might get criticized for.

On behalf of Access Athletes, we would like to thank Detlef Schrempf for taking time out of his busy schedule to do an interview with The Real Athlete Blog. If you have any questions for Detlef, you can email me at jrothbaum@accessathletes.com and I will pass them along.