Cameron Newton's Eligibility: Did the NCAA Get It Right? 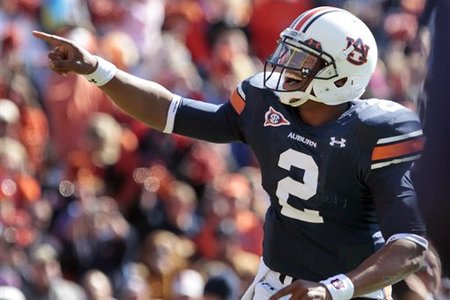 Tonight, the Heisman Memorial Trophy will be awarded to the most outstanding player in collegiate football. The finalists for this year's award are LaMichael James of Oregon, Kellen Moore of Boise State, Andrew Luck of Stanford, and Cameron "Cam" Newton of Auburn. Although the award will be given out this evening, perhaps the bigger story is not who will win, but whether Newton—the award's apparent front-runner—should even be involved, or what the eventual aftermath could be if further evidence surfaces regarding his eligibility.
Newton, who has led Auburn to a perfect 12-0 record and berth into the BCS Championship game on January 10th, has been subject to pay-for-play allegations since early November. To summarize the allegations, Cecil Newton, Cameron's father and a pastor at Georgia's The Holy Zion Center of Deliverance, has been accused of conspiring with a former Mississippi State football player to solicit somewhere between a $180,000-200,000 payoff in exchange for delivering Cameron to play collegiate football. Following a month of investigations, the NCAA concluded that a violation of amateurism rules occurred and Auburn declared Newton ineligible the following day. Auburn immediately appealed the NCAA's ruling and one day later the NCAA student-athlete reinstatement staff declared Newton immediately eligible. (For more on the process the NCAA follows for student-athlete reinstatement Click Here.)
The basis of the NCAA's ruling revolves around their interpretation of Bylaw 12.3.3, which states that "any individual, agency, or organization that represents a prospective student-athlete for compensation in placing the prospective student-athlete in a collegiate institution as a recipient of institutional financial aid shall be considered an agent or organization marketing the individual's athletics ability or reputation." The NCAA found that Cecil Newton's actions had violated this rule and thus Newton's amateur status. The NCAA, however, restored Newton's eligibility notwithstanding this violation because they found no evidence that Newton knew of his father's actions. As a result, the only punishments given out were de-minimis. Cecil Newton's access to the Auburn athletics program would be limited and Mississippi State has been disassociated with the involved individual.
Since the allegations against Cecil Newton surfaced and through the time the NCAA declared Newton eligible there has been a line drawn on what would be the appropriate result. On one side you have those who agree that the NCAA came to the correct decision within their own rules and regulations based on the available evidence. They believe that those seeking to make Newton ineligible are using flawed logic from other recent high-profile NCAA cases, where the differences in facts between cases do not allow these comparisons to be made.
On the other hand, those who believe Newton should be ruled ineligible see a major flaw in a system where a father can offer his son's athletic talents for upwards of $200,000 and only receive minimal punishment. They see the NCAA's ruling creating the possibility of a system where a collegiate student-athlete can be "shopped" at value to the highest bidder so long as the student-athlete is not aware of these dealings or simply denies knowing of these dealings.
The reality of the situation is that at this point we simply do not have enough evidence to render a verdict on Cameron Newton's eligibility, even in the court of public opinion. There is no evidence of Cameron Newton receiving any extra-benefits or evidence that he knew his father received any extra-benefits. Furthermore, there is no public evidence that even Cecil Newton received any extra-benefits or that Auburn University knew of any pay-for-play scheme that Cecil Newton was apparently operating.
If a punishment was going to be handed out that would cost Newton his eligibility and Auburn a shot at the national title then the evidence had to be in place. The problem is that a decision had to be made immediately while there is still a strong possibility that more evidence could surface. Further evidence, if harmful to Newton or Auburn, could lead to major violations down the road and further skepticism that the NCAA enforcement process is flawed. However, whether they end up being right or wrong, the NCAA made the only decision it could: Cameron Newton is eligible, at least for now. And as a result, Cameron Newton may win the Heisman Trophy. Cameron Newton and Auburn may win the National Championship. But even then the story may not be over.