"You just never know with these things... Both parties need to be happy with the deal—that's absolutely going to happen—and that may make things more complicated, I don't know. There's always the possibility that things could get messy. I've got to try to do my job on behalf of the partnership and our partners and everybody else involved with the organization, and Hank and I need to keep a level head and realize... that we're running a business here."
Source: [New York Yankees: Starting Early Pre-Free Agency Drama]
Commentary: It is common for sports organizations to take a hard stance in the press when it comes to negotiations. They usually like to show that they are in control, even if this is not actually true. In each case, you as the athlete need to identify the dynamics surrounding your negotiation. For example, in this case:
(1) The Yankees were the favorite to repeat as World Series champs and just lost in the ALCS. This means the team needs to have a strong off-season.
(2) The highly emotional Yankee fans are disappointed, and are waiting for another reason to throw their arms in the air with disgust—like if Derek Jeter went to Boston or Texas.
(3) The iconic George Steinbrenner passed away this year, leaving Hank and Hal Steinbrenner in charge. Now, they are facing their first major decision as owners.
(4) The public is wondering how will this next generation of owners run the team? “The Boss” had a strong reputation. Will management go downhill without him around?
When I see these comments from Hal, I don’t see anything shocking. He didn’t say anything about Jeter’s demands. I think he is just trying to let people know that he’s not a pushover and that he will be a strong leader like his father.
If you are an athlete in this kind of situation, it would be wise to use the public to your advantage. When it comes to public contract disputes, the more time that passes, the more pressure builds on the team to make a deal. The public begins to say, “OOOOH C’mon already! Just pay the guy!”
People don’t want to hear about the details; they just want their team to have the best players to help them win. Keeping this in mind, try to stay under the radar; don’t draw any negative attention towards yourself. Picture yourself as a character in a play, and your role is the Charlie-Hustle-type player—you have always done what was asked of you and more and now you're asking to be paid what you rightly deserve. If you play your cards right, the mounting pressure from the public could force management to make a decision in your favor (Remember Derell Revis, Brett Favre, and Amar'e Stoudemire last summer?).
If team management makes comments that threaten your contract, your first instinct may be to strike back and remind everyone about your greatness... Resist the temptation, don’t do it! Making comments right now can only hurt your bargaining position. The comments coming from your camp should be very straightforward and demonstrate loyalty to the team. Keep the public on your side. Let your agent take the hard stance in the boardroom.
Lesson for Athletes: As a professional athlete, use your agent to keep a pulse on the public’s opinion. Time is a factor in all negotiations—your agent should be a master at using this factor to your advantage. Try to keep the public on your side by not saying anything that will alienate them. Keep a good face on and have faith that your team will give you what you deserve. If they don’t, trust your agent to get it elsewhere.
(2) Brett Favre — After a meeting in which Favre was summoned by the league for alleged inapropriate behavior
Favre brushed off a question about whether the situation has weighed on him, insisting it was instead the ''front five for Dallas'' that weighed on him the previous week (week 6). He said this week his ''focus is solely on Green Bay.'' Asked why he hasn't denied the allegations, Favre said: ''The one thing I'm going to say is that's something that's within the league, and I'll just have to leave it at that—let that process work itself out.''
Source: [Favre not dishing details on NFL meeting]
Commentary: As a fan, I’m disappointed he didn’t reveal more, but if I was his agent I’m saying—Great Job Brett! If you are ever accused of inappropriate behavior by a member of your team, you should take a lesson from Favre. He has been around the block, and knows how controversy works. Brett is old by football standards (41), but he is smart.

Take a look around at your office and observe some of your older co-workers. Those older people who keep their jobs are smart. They know how things in the workplace turn out. They know how to play politics with other co-workers. They know how to make the right friends. They know how people think now, and how they will think in the future. Favre understands that he has nothing to gain by commenting on this situation. Eventually, all topics fade away in our society no matter how ludicrous (e.g. Kobe is an NBA Champ and Vick is a starting QB again). Favre is an iconic player and a sure-fire first ballot Hall of Famer. He just needs to let this story die at its own pace. The public doesn’t care if he pays her a large settlement. Just don’t let the details out!
Favre has already gotten a big pick-me-up from Randy Moss. Everybody has been so busy talking about his rant against a local catering company, and the Vikings subsequently waiving him from the team, that the allegations against Favre have taken a back seat!
Lesson for Athletes: Sometimes it is best not to comment (like our good friend Drew Rosenhaus taught us). Don’t add fuel to the fire if the public is anxious to hear bad things about you. Be a professional and continue to play at a high level. Don’t let it distract you, and if you do that, usually someone else will come along and take that attention off of you.
(3) Charlie Villanueva — CV31 tweets that Kevin Garnett called him a ‘cancer patient’ during a game
“KG called me a cancer patient, I'm pissed because, u know how many people died from cancer, and he's tossing it like it's a joke, I wouldn't even trip about that, but a cancer patient, I know way 2 many people who passed away from it, and I have a special place 4 those.”
Two games after the incident, when asked about his feelings on the incident, Garnett dismissed the beef — and Villanueva.
“It’s a nobody,” Garnett said. “I’m not paying attention to nobodies any more.”
Sources: [CV31's Twitter Page; Danny Ainge defends Kevin Garnett; Kevin Garnett dismisses Charlie Villanueva as a “nobody”]
Commentary: What have we learned from this interaction between NBA players? Let's go to the Bible of Sports movies, Any Given Sunday. Veteran running back Julian Washington told the flashy up and coming Willie Beaman, ”You earn the right to diss somebody on this team.” It’s true in all sports. Over time you earn respect, credibility, and special rights that newcomers don’t have. Hmmm let's see: a permanent fixture in All-Star Games, an MVP award, a championship ring, his face on a Wheaties box, Adidas commercials. KG is a hero in the sports universe. He has earned respect from over a decade of elite league play. 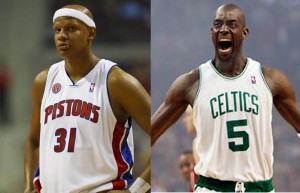 The public, media, and other players are on his side, they look the other way when it comes to a player that has made everybody money. Fast forward to May. The Celtics are playing the Heat in the Eastern Conference Championship. What reporter wants to risk not getting a quote from KG AND the rest of the Celtic locker room because they publicly attacked him for these comments? It’s tough for any athlete to try and knock KG. A person’s degree of power certainly plays a part in the public reaction. Our society respects people who have a proven resume.
Lesson for Athletes: As an athlete, there is a lot to learn here. If you have been wronged by another player in your league, be cautious before talking about it to other people, especially in social media channels. You need to know your role on the team. Can you risk alienating this player? Do you have enough job security that if you open your mouth, ownership will be okay with it? How established are you and your professional resume? How will the public receive you? Most of the time the big dog can get away with it. You may just need to grow thick skin.