Word on the Street... 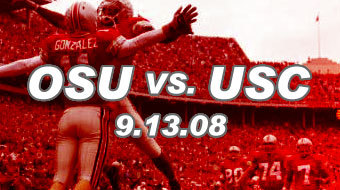 Once again, the big mouth is back ready to watch the hated OSU Buckeyes pull off the first #1 defeat of the season against the Stanford losin to, way overrated, extra weak PAC 10 conference USC. Again without naming any names, this is the word on the street from the big mouth barber on campus at Colors Barber Shop where all the elite athletes come for cuts.

(2) Will Terrelle Pryor have more of an impact or will Todd Boeckman play all game?  Pryor WILL play more than a few snaps this game...his athleticism will be needed.

(4) What do you say to the allegations that Tressel was scaling back plays last week to hide the playbook from USC?  Some people say dubyah Bush knocked down the towers, but that didn't stop him from winning twice. This is chess not checkers.

(5) What do you think about USC not being sanctioned after the Reggie Bush scandal?  Money talks loud, especially when you don't actually get caught with your hand in the cookie jar.

(6) What do you think the keys to the game will be for OSU to get out of the Coliseum with a W?  Because both teams' defense can practically stop the other's offense, special teams and T.O.'s will decide the game.

Ladies and gentleman, this will be the game where Tressel shows what he's made of because just beating Michigan won't do it anymore. He has set the bar so high by already winning a championship and with the largest athletic budget in the NCAA, it's win or win nothing else.