Why Am I A Pitcher?

I was asked the question earlier today, “Why do you like to pitch?” I didn’t hesitate to answer that question because the same qualities it takes to be a pitcher are permanent in my mental makeup as an individual. I chose to be a pitcher for the reason that I love the pressure of winning and losing. Every pitch you make counts, and every pitch you make is a decision that will either lead to your success or failure that day on the mound.

Life is full of challenges. Some people like to play the role of spectator and watch. Not me. I like to take the lead role. Sometimes people cheer for you from all corners of the field excited to see you thriving and winning. Other times, they bull bait and boo you. It is all part of the game. When everyone has their eyes on you, they don’t miss anything. I love when my nerves get going and the ball is in my hands and everyone on the field is waiting in anticipation of my every move. 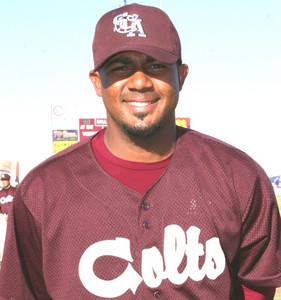 In my eyes, there is no other place on the field where a player has so much cause and dictates the tempo of the game. You start, change, and stop the game with every pitch.

I remember when I was a little kid, about 7 or 8 years old, and it was the first time I saw my older cousin Charles pitch. I was fascinated with how he stood on the mound throwing the ball with such velocity and I thought to myself that I wanted to do that too. The opportunity still hadn’t come and it was the beginning of the little league season. My team and a group of others took a trip to Dodger stadium to watch the Major Leaguers play. They were handing out flip books that day at the entrance of the stadium. I will never forget what I saw in that flip book. It was Nolan Ryan striking out Ricky Henderson for his 5,000th career strikeout. I was absolutely amazed how fast the ball whizzed by Ricky Henderson and I then decided that I was going to be a Major League pitcher someday and I would strike people out like Nolan Ryan.

That is what inspired me to step on the hill. That is why I can step on that mound day in and day out, good or bad, and get excited to face hitters, attacking the zone and getting the job done. It hasn’t been an easy road, but I wouldn’t expect it to be. As far as I know, there is only 1 Nolan Ryan, 1 Sandy Koufax, and 1 Bob Gibson, and many other greats who stood out during their eras. What I am saying is, if it were easy, what these gentlemen have done would have no significance. But it does have significance. Their history inspires us to be great in this game. Their history has inspired me to continue regardless of how much pressure or difficulty has come my way. I know in the end, I will have success unimagined to many. It is my dream to stand amongst these men. Dreams are only accomplished with hard work, determination, and a burning desire that cannot be deterred. That is the road I am going to take.