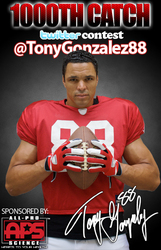 All-Pro NFL tight end Tony Gonzalez, in conjunction with his all-natural sports nutrition company All-Pro Science, Inc, is running a neat social media campaign to celebrate his 1,000th career catch. The winner of the contest will receive an autographed glove used during the 1,000th catch game and a trip for two to Atlanta to reenact the catch with Gonzalez, along with tickets to a Falcons game.

Gonzalez is only one reception shy of becoming the seventh player in NFL history, and the first tight end, to reach the 1,000 catch milestone. He is expected to make this catch in the Falcons' season opener on Sunday, September 12 at Pittsburgh.

It's always nice to see a professional athlete thinking outside the box to reward his fans and create good will in the community. A clever and fun social media campaign like this will definitely enhance Gonzalez's brand and reputation. This underscores the importance for pro athletes to have a strong PR team. Jen Campbell, All-Pro Science's PR Director, is doing a fantastic job and this campaign will no doubt be highly successful and create tons of positive publicity for her star client.

For more details about the contest, check out the press release that Jen Campbell sent me.