Tips for Athletes on Speaking to the Media & More 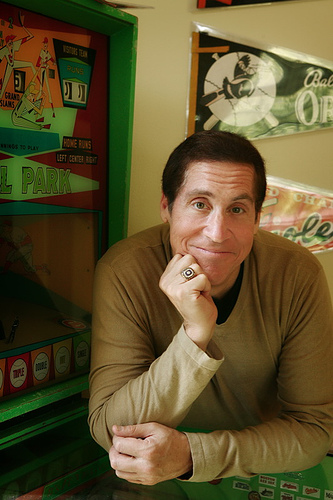 Nationally acclaimed broadcaster and performer, Roy Firestone, shared some great insight about how athletes should approach dealing with the media and their professional careers, as well as pursuing a career in broadcasting when their playing days are over. With 5,000 interviews under his belt, I tapped into Firestone's considerable wealth of experience to get some great advice for competitive athletes. For all of my loyal athlete readers, make sure to take careful note of the hinters below and spend some time honing your public speaking skills (it takes hard work). For all the sports professionals out there—agents, marketers, public relations consultants, etc.—please pass this article on to your clients. In case you missed my interview with Firestone, be sure to check that out as well!

1.  What advice would you give to a professional athlete just starting his pro career, in order to avoid becoming the next athlete who ends up on the front page of the sports section in some sort of trouble?

Well, not to sound like a prude, but I'd be home by 11:00 if I could, especially during the season. I would try to keep away from booze. I would stay as far clear of as many hanger-ons as I could, or people I look at as potential hanger-ons. I would try to stay focused on the sport I'm making my money at, and I would totally, one hundred percent, stay away from guns.

2.  What would you say to an athlete who is about to hold their first press conference?

Speak concisely, speak from the heart, don't be somebody you're not, be sincere, answer the questions that have been asked, don't give them too much, and if you feel that it's too personal, then tell them that. Don't talk about money and don't talk about what you think you are yet, because you're not anybody yet. Don't ever make any predictions like "I'm going to go to the Hall of Fame" or anything like that. I've heard some athletes do that over the course of their career, including Kordell Stewart of the Pittsburgh Steelers. Slash once said he believed he was going to the Hall of Fame. Well, he was out of football in three years. Never make any grand announcements.

3.  What tips could you offer professional athletes on how to best approach interacting with the media?

Try to remember that everyone has a job to do, including yourself by the way. You have a job to do too. Don't get carried away and so preoccupied by the media that you're not focused on your sport. Make yourself available in a short period of time—20 minutes or an hour maybe a week. The rest of the time keep to yourself. Don't be too accessible where you are doing everyone's little show and everyone's little TV talk everywhere you go. Remember to keep your sense of your own dignity and the sense of your purpose, which would essentially be an employee of the sports team that you're involved with. If you're a college player, remember that you're a student too and you can't please everybody. That's probably one of the toughest and most important things of all as a public figure—that you just cannot please everybody.

4.  As the king of the one-on-one interview, what tips could you give to athletes in that specific type of environment?

Be yourself and have a sense of humor about who you are, but also remember your dignity. Don't take yourself seriously, but at the same time, carry yourself with a certain kind of self-effacing quality. People like that when you tease yourself a little bit. People like Bobby Bowden because he is self-effacing and because he's humorous, and he feels like he is one of us. Don't make any grand pronouncements of who you think you are. That would be a general rule.

5.  What are some of the biggest mistakes you see athletes making when speaking to the media?

Anything involving brashness. Any confrontation. It's always a big mistake to challenge the media. Keep it to yourself. Never ever, as we saw Larry Johnson do, name call. You don't ever make the mistake of trying to exchange verbiage with a member of the broadcast or newspaper business, because you're going to lose. And you're going to look bad. When you get older, you won't have your hands or feet, and you will have to show what you can do off the field. But, don't ever confront a member of the media. It's a mistake. They play it over and over and over again on TV and you look like a fool.

6.  What is your opinion about athletes who have refused to speak to the media?

Well, first of all, there is no obligation to speak to the media. But there is a way you can put releases out with quotes... People can go to your own website to get quotes. You can control it that way if you really want to be controlling. But there is no obligation. But I think that there should be a kind of responsibility that an athlete has to the public. But an obligation might be a slightly different word than responsibility. I think they should keep in mind the people. The fans out there would like to hear from them. Be gracious. Try to understand that people are trying to do their jobs when they interview you. If you feel the interview questions are inappropriate, keep it short. You can be terse if you want. But answer the question directly, try to be honest, and don't get caught in traps.

7.  What advice would you give to a professional athlete aspiring to become a sports broadcaster after retiring from the game?

8.  What are some of the most difficult aspects that you perceive in making such a transition from an athlete to a broadcaster?

Well, many athletes aren't verbal; they're physical. That's a stereotype, but it's true. So, they have a difficult time with verbiage and street slang. Although street slang is more and more being accepted among broadcasters. I'm talking about athletes who are very street. People like Deion Sanders. People like Eric Young. Shannon Sharpe. You're seeing more and more of a hip-hop approach to broadcasting. It is what it is. I think that people should understand that you really do want to be as articulate as you can, as thoughtful as you can, without trying to bring too much of the street thing. Because that's trendy. Because that doesn't have legs, although it appeals to a certain audience maybe. Not everyone is Chris Rock... You know what I'm trying to say. You have to find a way to communicate to all mainstream people and mainstream media. Do it with a flare, but also maintain a certain kind of composure and carry yourself in an articulate, creative, and original way.

9.  As a big proponent of community service work with your Roy Firestone Award, what recommendations could you give to athletes as to how to get more engaged in the community and actually have a passion in their community service?

Money is not nearly enough. Your time is as important as your money. Pay attention to what it is your contributing to. Make sure you keep an eye on where the money is going. Spend time with kids. Spend time on worthy causes. Don't just lend your name to something and get thrown into a potential pothole. I've seen lots and lots of athletes lose a lot of money involving themselves in charity work that wasn't properly funded and it wasn't properly executed. Know what you're investing your time in. Don't just throw money at something. Like a restaurant... Don't lend your name to a restaurant before you taste the food, so to speak. Learn about what's on the menu before you put your name on a restaurant.