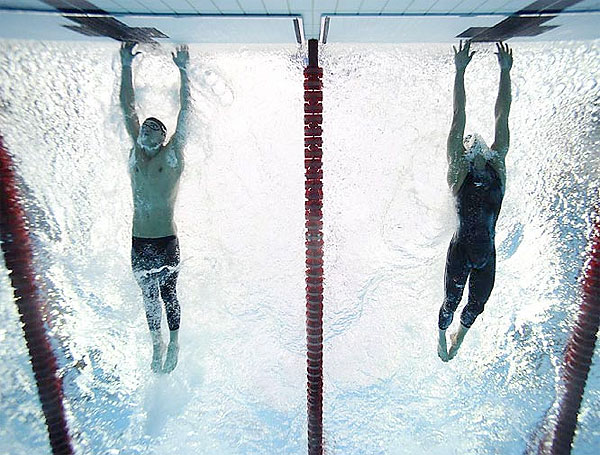 As 2009 came to a close, conversations turned to the greatest plays of the decade.  Undoubtedly, among them was Michael Phelps and his magical Olympic run in 2008.  As Phelps brought swimming to mainstream attention, the entire world was blown away when he won the 100-meter butterfly by .01 of a second to beat out Serbia’s Milorad Cavic (Sports Illustrated provided a frame-by-frame of the miracle finish).  Phelps thought that he had only taken second – not won his 7th gold medal.

According to an article posted on ESPN.com by the Associated Press, “Phelps thought he lost -- until he saw the “1” beside his name on the scoreboard. [Phelps] ‘When I did chop the last stroke, I thought that had cost me the race. But it was actually the opposite. If I had glided, I would have been way too long. I took short, faster strokes to try to get my hand on the wall. I ended up making the right decision.’ ”

Michael was lucky with the decision he made, but he still could have easily taken 2nd.  Quite often job or internship searches will come down to two candidates – both equally qualified.  The company must then decide based on the slightest of margins which person to hire.  The employer uses all of the information (down to the smallest detail) gathered from application materials, interviews, and references to make this tough decision.  In some cases, the final decision is very much like that .01 narrow margin.

Working in college career services for ten years allowed me to hear about many successes and mistakes related to the job search, and I would like to share some examples of actual events that were the make or break points for candidates:

1. MISTAKE: Standing Out – In The Wrong Way

A senior from a prestigious college was interviewing at an advertising agency.  He was very bright, had done all of the research on the firm, and his interviews were going well.  The challenge?  His suit looked like it wasn’t recently dry-cleaned.  This was an issue because his suit ended up taking the focus away from his qualifications and skills.  He became known as “The wrinkled guy.”  The interviewers were distracted by something so simple as his attire, and the result was that they were not able to recall enough good reasons to hire him over another candidate.  Don’t let your outfit steal the show.

1. Why would anyone care so much about someone’s suit?  First, it demonstrates attention to detail, a skill most employers require.  Second, it doesn’t take much to get distracted.  If you give people a reason to focus elsewhere, they probably will.  When it comes to your interview attire, dressing conservatively and paying attention to the small details will allow your interviewers to focus on what you have to say and not on what you are wearing.  You can add small touches to make your outfit unique, but keep in mind that you want the focus to be upon you and your qualifications.

2. What are some of the small details?  Men: Is your suit cleaned and pressed?  Is your shirt also cleaned and pressed and not right out of the package?  Are your shoes polished and in good condition?  Are you wearing socks – and are they dress socks?  Women: Is your suit cleaned and pressed?  If opting for a skirt, can you sit comfortably without it being too short?  Are your heals a conservative height and in good condition?  Is your top appropriate for your suit?  You may be thinking that this is just common sense, but these are very common fashion mistakes for interviews (and I have actually seen worse errors than these).

2. SUCCESS: Following Up & Thank You Notes

A recruiter was searching for summer interns and was happy to find three candidates who were equally qualified.  All were very prepared and interviewed well, and each candidate brought similarly strong skills to this internship experience.  The recruiter was really struggling with making this tough decision.

Only one candidate, however, sent a follow up email thanking him for his time and added a brief paragraph on how excited she was about this opportunity.  The other two candidates did not take this extra step.  The recruiter immediately offered the internship to the woman who sent the follow up note.

1. Thank you notes and following up are important parts of the search process and have been the deciding factor on more job offers than I have time to tell you.  It may seem like an insignificant act, but it can actually be a true differentiator.

2. The note not only gives you the chance to thank the recruiter, but also provides another opportunity to discuss your interest in the position.  Email and handwritten notes are both acceptable, but the more important issue is timing.  The notes should be sent out as quickly as possible after the interview.  Any delay in this process makes the gesture appear as more of an afterthought rather than a genuine expression of gratitude or interest.

A young woman from the northeast applied for a sales position and she was fortunate to get a final round interview with the company.  This firm was based in Atlanta, and their recruiting process included reimbursing finalists for travel expenses.  They arranged for her flight, and put her up at a hotel directly across the street from the office.  The interview went smoothly and a few days later the recruiter received the expense report.  In addition to meals and taxi fare, the candidate had also requested reimbursement for a map of Atlanta.  The recruiter asked the candidate why she expensed a map, and she replied, “Well, I figured that if I am going to move to Atlanta, I should know where things are.”

The hiring manager who interviewed this candidate was on the fence whether to offer her the job.  When he was told the story about the map, he said, “FORGET IT.”  He then offered the position to another candidate.

1. While you might never consider expensing something as extravagant as a big dinner, theater tickets, or nice bottle of wine, it is also not recommended to expense something as trivial as a map, bottle of water, or gum.  Treat the employer’s money as if it was your own – be frugal and respectful with it.

2.  A level of confidence is always good to have; however, this example demonstrates that the candidate moved beyond confidence, over to arrogance.  She outwardly assumed she would be relocating to Atlanta to work for that company before she even had an offer.  This really rubs people the wrong way – you don’t have the job until you get the offer (and even then the offer can be rescinded).

Two candidates were interviewing for an analyst opportunity.  They both paid attention to the small details and presented themselves well on paper.  In addition, both candidates had conducted solid research on the company and its competitors.

One candidate took his preparation a step further and searched for the company in his college’s alumni directory.  He not only found a list of alumni who worked for the company, but also discovered that one was a former football player.  The candidate reached out to the football alum, building on the connection of playing the same sport as well as having attended the same college.  Not only did he gain valuable information on the interview process, but also the alum was so impressed with the candidate’s motivation and preparation that he put in a call to the recruiter and helped tip the scales for an offer.

1. Reaching out to people in your network is a perfect (and highly recommended) way to prepare for your job search.  Often times they can offer insights on the process and what the company is looking for.  If you make a good first impression, it could even lead to a recommendation on your behalf.  Some recruiters have actually checked internally to see if any of the candidates have reached out to their alumni within the company.

2. Taking the time to think about who is on your team is an invaluable exercise.  Frequently, people do not make this effort and end up overlooking key individuals that could potentially make the search process easier and more successful.  Family, friends, and college alumni are just the tip of that iceberg.  If you do not have access to an alumni database, this same research can be done via other professional/social networking sites.

During the interview process, employers are equally looking for reasons NOT to hire, as they are TO hire someone.  While one cannot possibly know all of the “narrow margin” reasons why people are/aren’t selected for a job, staying aware of the small aspects in your performance can make a big difference in the outcome. Phelps kept his mind sharp and was able to turn a loss into a win.  As an athlete, preparing for your job search the same way you would train for the big meet or game is your advantage with this process and can certainly give you the .01 edge.