Lamar Odom to battle the IRS all by his lonesome 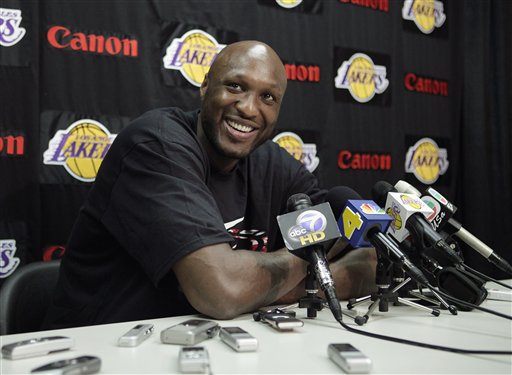 As if it wasn't bad enough that Lamar Odom gets exorbitant fines for committing a flagrant foul and then fined again for voicing his opinion to the referee. He'll now fight an uphill battle challenging the IRS for back-taxes over...semantics?

Odom has filed suit against the Internal Revenue Service because it would not allow him to deduct $12,000 in fines and $127,000 for fitness training. The 31-year-old Lakers forward is suing the IRS for sending him a tax bill of $87,000 for 2007, according to Forbes.com. The bill included $9,000 in interest. Odom claimed $9.3 million in adjusted gross income that year, and has more recently signed a multi-year deal with the Lakers for up to $33 million.

The recent IRS power-play against Lamar brings to light an age old argument of what exactly is a tax deductible expense.

Internal Revenue Code Title 26, Section 162 details what are deductible and non-deductible trade or business expenses. The Code, laws passed by Congress and interpreted and enforced by the IRS, states that deductible expenses must be "ordinary and necessary" and may not be an illegal payment to government officials or employees. Congress defines "fines and penalties" as they relate to illegal activities, Illegal kickbacks, and bribes.

Section 162 does not address verbal abuse of referees, flagrant fouls or even showing up late to practice. The issue here is that in professional sports, infractions committed while in the performance of the athlete's profession for which he was hired is not a "fine or penalty" as defined by Congress. These employer-imposed infractions are rules enforced by professional athletic organizations to discipline their employees.

Therefore, it is reasonable for Odom to assert that employer-imposed fines constitute ordinary and necessary expenses incurred in carrying on one's own trade or business.

Publication 17, the IRS's interpretation of the Code, discusses "maintaining your current job skills" as a deductible item. According to the NBA Uniform Player Contract:

As a condition of the player's employment—detailed in his contract—he must maintain not only good physical condition, but sufficiently good physical condition to play skilled basketball. The cost in maintaining his current job skills, as required by his employer specified in the employment contract, is not a personal expense. Therefore, his training costs appear to be fully deductible according to IRS Publication 17. Training costs to maintain a physical condition sufficient to perform at the level of a professional athlete may require specialized athletic and medical equipment as well as skilled professionals to assist in conditioning.

Tax planning, preparation, and representation in front of the IRS are best handled by professionals skilled in these areas. The rules are complicated, confusing, and not well defined. In this situation, Lamar Odom is experiencing some of the most gray areas of our tax code that even tax professionals continue to debate and the IRS continues to interpret to their advantage. The most concerning matter in Lamar Odom's case is that he has chose to represent himself in front of the IRS. Lamar, you didn't do so well in arguing your position with the referee, what makes you think you'll do better with the IRS?