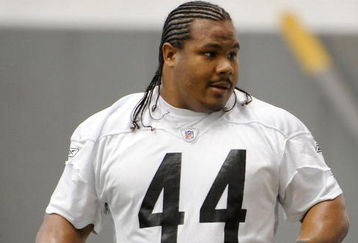 For Frank Summers, it went something like this… you tear your MCL your last game of your senior year of college, you’re future as an NFL running back hangs in the balance, you dedicate yourself to intense knee rehabilitation so you can perform at your best at your all-star game and more importantly your Pro day, you overcome the odds, get drafted, and start three games before suffering a season-ending back injury.

Frustrated?  Furious?  Finished with football??  Nope.  None of those things.

Frank "The Tank" Summers, a standout running back at UNLV and current Pittsburgh Steeler, drafted in 2009, is more motivated than ever.  I caught up with him a couple months back before a Pittsburgh Monday night football game and talked injuries, mentality, and the future.

“I’m still dealing with it now.  Watching the Monday night football game tonight is just part of the process.  You know it’s sad that I have to be down for a while, but I also think everything happens for a reason.  There is nothing I can do to go back in time and the only thing I can do is rehab and look forward to next season.”

Summers suffered a herniated disc injury causing him severe pain due to the pressure that was applied to his spinal cord and nerves.  His case required season-ending surgery and a strict rehabilitation regimen.  I asked him what he thought about being out like this.  “I know I’ll be in the best shape of my life and come back stronger than ever.  I’m going to use it like a redshirt year in college.  I’m just trying to learn as much as I can and use that to my advantage when I come back next year.”

But what to do with the long year ahead of him?  Sitting out during the weeks of practice and worse, watching the games helpless from the sideline.  The NFL regular season stretches for 17 weeks, with each team playing 16 games.  The 5-foot-10, 245 lb. Summers started the first three games and likely would have seen time in each of the remaining games but now, his role completely changed. 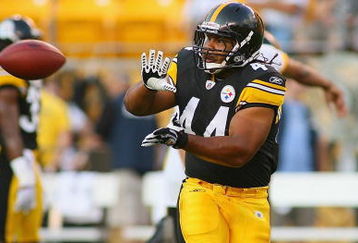 Summers commented on what it was like to be an injured NFL rookie in the locker room of a renowned franchise.

So what is he working on now?  “My knowledge of the game.  I thought I was a very smart guy coming out of college, but obviously the NFL is a huge difference.  Learning defenses, learning what to read when I’m running the ball, learning what to read and knowing what everyone else is doing during a play. All the little things that you wouldn’t think meant too much.  But the more you know, the better you are.”

Summers understands that the hard work he is putting in now is critical to his success.  The motivation and dedication that he shows to his recovery and future game play is incredible but not easy.  “It’s a little rough but I have full confidence on my return next year.  This off-season I have confidence in my training and what I’m capable of.  The big picture is that I made the team and I was starting, and when the injury hit, that was that. But the positive is that I’m able to play this game and I know that.  I just have to take that and I think how much better I’ll be after what’s all said and done with the training and being here a year.  The sky is the limit for me from this point on.”

I asked Summers to remember what it felt like charging out of the tunnel for his very first game as an NFL player and as a Pittsburgh Steeler.  “It was nice and I wanted to suck it all in.  I wanted to look at everything possible.  I wanted to slow everything down.  It was a dream come true and I’d been in so many stadiums before saying, ‘Dang, I wish I had the opportunity.  I wish I could play in the NFL.’  I finally was there and I wanted to remind myself that this is what I wanted and this is what I dreamed of and now its time to take full advantage of it.”

I can imagine that being the best feeling in the world.  All the hours of practice, the blindsiding hits, frigid ice baths, 5 a.m. runs, sore muscles, exhaustion, wins, loses… and you make it.  You make it to the big show.  The naysayers can’t take that away from you.  But his draft day must have been nerve-racking, right? 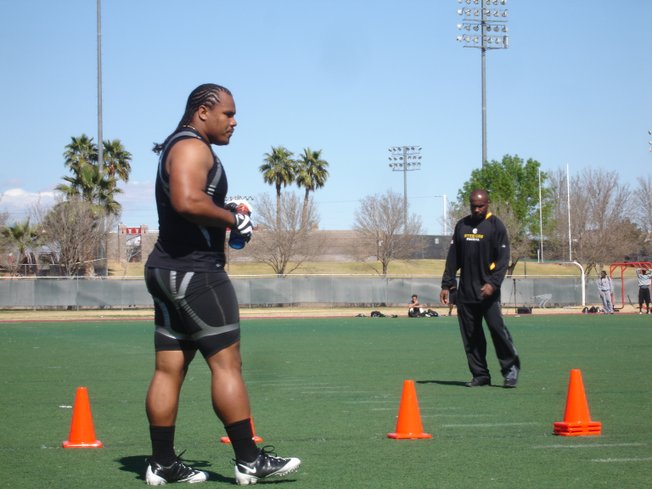 Ice water in his veins.  He had some great advice for athletes heading to the next level.

“Just do everything in your power to put yourself in the best position.  After that you have no control.  Let what’s going to happen, happen because you have no control. The only thing you can control is your workouts, your interviews, your all-star game, but other than that, that’s all you can control.  When you have the opportunity, put it all out there and leave the rest with whomever you may believe in, whether it’s God or whomever.  Just give your all, every opportunity you are given.”

Summers’ agent, Craig Schaeffer, co-CEO at Elite Sports Agency confirmed that Summers is on track with his recovery and is looking stronger than ever.  “I really feel that Frank is going to have a big year next season.  He is training with his former pro-day trainer.  He will no longer have rookie status and he knows he is strong and healthy.”

Schaeffer and Summers are close friends and both speak to their great working relationship.   “After signing with Craig, I’d say we talk if not every day, every other day.  Most guys don’t do that.  It's more than business with us, we’re friends. We have a great relationship.”  Schaeffer said he sees Frank 3-4 times a week.  “Frank is close with my family and we have a great friendship.”

Frank Summers seems to be in a good place.  His confident mentality is critical and a testament to his earned success.  He just seems to get it.

“Injuries are part of the game.  Injuries happen.  It’s how you come back from that injury.  You have to rehab and then you have to know that your game will pick up right where you left off.  That’s that.”

On behalf of Access Athletes, we would like to thank Frank Summers for taking time out of his busy schedule to do an interview with The Real Athlete Blog.