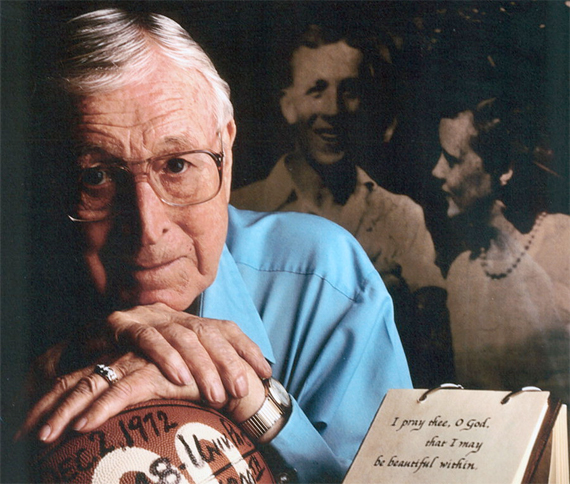 This post is adapted from an interview I did with Steve Jamison in 2010. March Madness is a time when team greatness is revealed. It is also a time when the best baseball players in the world go back to work—fine-tuning the fundamentals of their game. College basketball’s greatest coach was a tour de force for principled leadership and success. Great teams and fundamentals are of vital importance no matter what your endeavor, no matter what time of year.

Do you need proof that leadership is not about style? The legendary UCLA basketball coach John Wooden suggests that leadership is influence derived from one’s character. For Wooden, the ideal leader is someone whose life and character motivate people to follow. The best kind of leadership derives its capacity from the force of example, not from the power of position or personality.
Much of what passes as leadership today is nothing more than manipulation of people by sticks and carrots—threats and rewards. That’s not effective leadership for the long-term. Authentic leadership seeks to motivate people from the inside, by an appeal to the head and the heart, not by use of command and coercion. Compliance seldom, if ever, leads to authentic commitment.
Wooden influenced players through his character which he displayed in everything he did, from the way he recruited student-athletes to the way he taught them to put their socks on.
For Wooden character is the essential element necessary for great leadership.
Steve Jamison, author of best-selling books on John Wooden and Bill Walsh, spent fifteen years working with Wooden on various books on leadership. He teaches Wooden’s principles to business leaders at UCLA’s Anderson School of Management.
“The reason he resonates with people, is as a teacher, leader, coach, he was extra ordinary and as a person he was even more extraordinary. That’s a tough combination,” Jamison said.
Jamison began working with Wooden to organize and distill his wisdom for coaches and leaders in any industry. At the time, he couldn’t find a publisher because most thought Wooden was no longer relevant. As one publisher told him “Coach Wooden is a little dusty on the shelf.”
Character, however, is never a quality to be shelved. Coach Wooden, as Jamison said, “Didn’t seek players who were characters. He wanted players that had character. Character was something that he felt essential to being a good performer, a good leader. Much of the problems we see today we can lay at the foot of leaders that have little character.”
When You’re Through Learning, You’re Through
Coach Wooden practiced life-long learning—as you would expect from a great teacher. Jamison, a leadership expert and educator said, “A lot of leaders get to a position with a lot of authority and power, it’s very easy to become overconfident and arrogant and think you know it all. John Wooden never made that mistake. He was very secure in what he knew but he never stopped learning. Never stopped looking for answers.”
“How willing are you to learn?” Jamison asks. “That doesn’t mean just opening a book or taking a course, but how willing are you to challenge your beliefs and the way you do things, examining ways to improve. How willing are you to entertain new ideas? Whatever your level of success, self-evaluation is important.”
Jamison said Coach Wooden would simply ask leaders, “How can you improve if you don’t have the ability to analyze yourself?” Jamison backed up this declaration from Coach Wooden by offering a story that exemplifies his commitment to self-evaluation.
“In Wooden on Leadership, Jamison explained, "he tells the story of getting to the 1962 semi-finals of the NCAA national championships where UCLA played Cincinnati, the defending national champs. They lost in the last seconds. On the flight back his assistant coach Jerry Norman says to him ‘coach you know we got some guys coming in next year (Goodrich/Erickson). You know, maybe we should look at bringing in the full court press.’ John Wooden knew what it was, he’d tried it his first two years at UCLA.”
“Maybe it’s time to revisit the press, said Norman.” Wooden, secure in his self, listened to his assistant. The next year UCLA pressed full-court. And the rest, as they say is history.

Wooden on Teaching: The Little Things Make the Big Things Happen
“One of the great abilities John Wooden had was his ability to take a complicated issue, distill it, so that, as he said, that ‘little things make big things happen,'” said Jamison.
“In my view, what it was that he did to teach leadership, and it’s not complicated, he behaved like a leader. He acted like a leader. The primary teaching tool he used was his own life as an example,” Jamison commented.
Coach Wooden was a proponent of the principle that people don’t care how much you know until they know how much you care. According to Jamison, “John Wooden had an effusive way of letting players know he cared. His practices were ferociously intense. There wasn’t any slack in practice where you could hang out and shoot the baloney. He found time at the beginning when players were coming onto the court to take a moment, to pull someone aside as they were ambling over to the practice and ask about how things were going. ‘How’s your mother?’ ‘How’s that history class going?’ He did this to show his sincere care and concern for his players.”
Pyramid of Success
Coach Wooden’s primary teaching tool has been his leadership model as distilled in his Pyramid of Success. Commenting on this influential model for effective living, Jamison said, “His definition of success isn’t about big, it isn’t about power, fame, fortune, and prestige. For him, the highest level, the highest standard of success is making that effort to become the best that you can become whether it is a coach, teacher, student, member of a team.”
Success, as Coach Wooden says, is the peace of mind which is a direct result of self-satisfaction in knowing you made the effort to become the best of which you are capable.