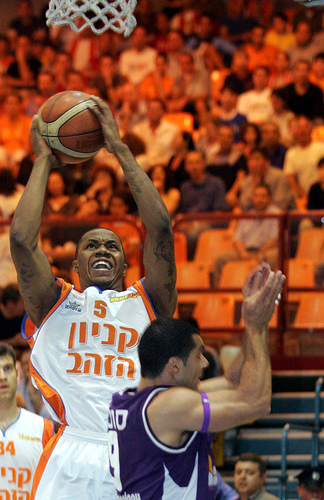 Be sure to read the first part of the John Gilchrist Interview Series: Part I: The Journey

AA: When you made the decision to leave for the NBA after your junior year in college, did you make that decision personally or did others influence your decision to leave?  If you feel you were influenced by others, do you feel they were giving you the right advice?

JG: Obviously, looking back on it, I wouldn’t have done it because what was said about me.  For whatever reason, my personality as a leader and all these other things were questioned.  They (ex-coaches) were saying I wasn’t a good teammate, which I disagreed with, but I knew I was confident and positive.  While I was going through the NBA combine, I knew I was talented enough to play at that level.  [Even] if you go and you do well, it shows you that it’s something bigger – that I didn’t understand.

Going overseas really taught me how to be professional.  It really taught me what it was all about.  Before I thought it was all about playing the sport.  If I’m good in the sport then basically – what can you say to me?  It’s all the things that come along with being a role model and being that person that I never looked at myself as being.  Being someone that when people’s eyes are on you, you have to be marketable.  People who are paying you, have to be able to trust you.

I feel that was the main reason.  Pretty much, what I’ve been told the reason I wasn’t drafted was because word got out that I wasn’t fit to handle that pressure.  I was background checked and they [NBA personnel] talked to my coaches and they were saying I was really immature.

AA: You decided to walk through that unknown door as a player when you left college.  I guess I’m wondering if you received enough advice from your support people at the time regarding the door you would be walking through.  I'm not sure you were ready for it in terms of all the “stuff” that comes with it.  When you decided to go to Israel to play, it sounds as though it was a positive experience.  How old were you when you went to Israel?

JG: I went to Israel when I was twenty-one years old.  You know it was really therapeutic for me because as I said before, I’ve been pushed in this direction forever.

AA: It’s kind of refreshing to get out of the country and start somewhere else.

JG: Definitely, because I always wanted to travel.  That’s something I always dreamed about as a kid.  Travel the world and go to different places and see different things.  My favorite subject growing up was history and social studies.  You’d look in the book and see a picture of a pyramid and it was like, WOW what is this?  I wish I could see this in person.  Also, I was away on my own and had time to grow up.  Time to reflect on a lot of things.  You hit the nail on the head.  Obviously, I didn’t get the right information or the right advice about leaving college early.  As far as my career was concerned, it was a bad move, but you know personally, it was really good for me.

AA: It gave you the opportunity to leave all these people that were in your face about your skills and abilities and what you should and shouldn’t do, and begin to meet your needs of "Hey I get to travel.  I get to be around new people, a new culture, and be myself.  To figure out who I am as a person.”

JG: Exactly.  To really find out who I was as a person.

AA: Did the coach in Israel help you with that?  Or, did being in a different environment allow you to start to do things and see yourself a bit differently?

JG: I was blessed in having a good coach over there (Guy Goodes).  He was a great player from Maccabi, Tel Aviv, which is like the NBA [team] of Europe.  He was a great player in his day, but he ended up getting hurt when he was 31.  He was only 33 in his first year as head coach when I met him.  Guy really gave me a lot of his knowledge.  I learned a lot about basketball.  Also, it was the first time I received money and the first time I was on my own.

AA: You were beginning to make your own choices.

JG: Exactly.  It’s not like when you’re in college where they dictate everything that you do, just like they do in high school.  You’re away, but they do keep the schedule.  It was a time for me that I was able to live a little.  I went to different places and traveled.  I sat around and reflected, and learned a lot about myself.

AA: Which is huge for any human being, particularly for an athlete that’s been on a track of what you've been describing.  When you’re in high school and college, you’re expected to be doing your homework.  You have to get to the gym.  People have expectations of you.  You rarely get to sort of kick back and just do life.  Yet at the same time, basketball gives you the opportunity to be visible.  You had this stardom thing going for you, which can work in some ways, but in other ways, it detracts from just being able to hang out and do things that young adults do.  It sounds as though playing in Israel paid off for you.

JG: It definitely paid off as far as improving my life.  Financially it hasn’t really paid off.  Maybe in the long run it will.  I know it definitely helped me personally.

AA: How would a team in Israel find a player like John Gilchrist and know he’s available?

JG: That’s what an agent is for.  That was part of the reason I signed with Joel Bell, my agent at the time.  Joel had played for coach Gary Williams when he was at American University.  His whole pitch was that he knew Williams was a tough coach and knew how it was playing for him.  Joel was going to talk to Williams and smooth everything out.

AA: Leading up to the NBA Draft, did your agent try to smooth out the noise that was out there about you?

JG: After the college basketball season, the coaches leave and go recruit.  When the season was over, I worked out at Maryland for another month.  Then I went to Philadelphia and continued to work out there to prepare for a pre-draft camp.  I never really had a sit down with my coach.  It was a situation that got blown up through the media.  There were a lot of articles that came out that there had been a fight between myself and Gary Williams.  I hadn’t gone to the media and said anything.  I didn’t understand where this was coming from.  I just thought it was something that would blow over.  But it got to the point where no one wanted to mess with me.  At one point, I read, “he’s something like a cancer to the team.”  That was really strong.

They say, “you are a cancer to the team and a head case.”  Did I think it was fair?  No.  But it taught me a lot about the business.  Sometimes you are going to be put in situations where there’s going to be dark times.

AA: Joel wasn’t able to soften these rumors, get the uproar under control, and get you back on track?

JG: The thing about it is I never say anything bad about Joel.  All I can do is take full responsibility for the things that I did when I was in college.  I could have been a better leader; I could have done this and that.  Joel tried his best to market me and the people [NBA teams] were scared to invest money in me.  That’s just the way it was.  Joel got me fourteen workouts and team interviews.

AA: The momentum was going in the wrong direction.  From your experience in Israel, how did you develop a better understanding of yourself as a basketball player emotionally and physically and what it takes to become a professional player?

JG: I mean basically just being around the veterans there’s a lot of players overseas that came over before me and were in a similar situation.  Everyone hits a bump in the road.  Everyone tells me you need to really try when you’re young because you can always come back to Israel.  You need to try to have the opportunity and really give it a full push to get in the NBA, if there’s a window of opportunity.

So I am trying to not worry about anything but playing ball.  I’ve read a lot of books and I really just try to focus on my leadership qualities.  I never really understood this part of myself.  I kept reading, “he’s a talented player, but his leadership and character issues are in question."  I was like, “what is that?”  All I was doing was being the person that I’ve been.  I know I’ve never been perfect, but I was acting the way normal people I knew acted.  I run into people from high school that understand me.  This is how my friends were; this is the way normal people I knew acted.  That was what was different at college.  You have to be more universal and more sensitive to other people's ways of living.  Spending time in Israel has broadened my horizons even more.  You have to have respect for other people’s cultures.  You might say something that might be offensive to someone and you don’t even know it.

Please stay tuned for the third part of this exclusive interview with John Gilchrist.